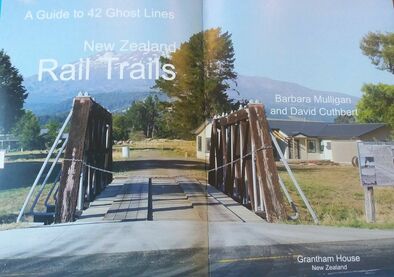 The frontispiece of the book that was published by Grantham House. Photo Barbara Mulligan
We are Barbara Mulligan and David Cuthbert, both retired after many years in various public service and not-for-profit roles. David sailed recreationally in New Zealand's coastal waters for many years, and has a wide interest in maritime matters generally. David is currently a Board member of the NZ Rail & Locomotive Society, and chairs their Administration Committee. He is also a  member of the Board of the NZ Ship & Marine Society.

A long-standing interest in small ports and all associated maritime matters led to an interest in land-based connections between ports and inevitably to the role of branch railway lines connecting to ports.

When driving round New Zealand visiting small ports our constant companion was a copy of Exploring New Zealand’s Ghost Railways by David Leitch and Brian Scott, researched and written during the first half of the 1990s.  Some of the directions in the Leitch/Scott publication caused great frustration, being  vague and lacking in detail.

Over time, access to new technology such as GPS and GIS, combined with the simplicity of Google Earth, seemed to provide an opportunity to track and trace the railway lines in a much more detailed manner, and the idea of writing an updated version of the Leitch/Scott publication became much more than a response to frustration. Recognition that over time the landscape was inevitably changing and rail heritage was rapidly disappearing focused our thoughts on writing a new and somewhat different book on the subject of New Zealand's “ghost railways”.

During the intervening years some old railway lines had been converted to alternative use – as  vintage/steam railways, as  cycling/walking trails, or as a tourism venture adopting new technology or where “rail carts” were operating on old branch lines.  Information about all these is readily available online and doesn’t need repeating. Some routes had been “mothballed” pending decisions as to their ultimate fate. With these factors in mind we developed criteria for including (and excluding) branch lines.
SELECTION CRITERIA
To be included a branch line had to meet the following criteria:Excluded are:These criteria sorted out which lines should be described, with the final number being 42. They include a couple which only just made the cut, primarily because they had something else of particular interest. For example, the Cape Foulwind branch only just met the criteria but was included because it has such an interesting local historical context, it is easy to visit and there are many other local features to explore.  The same applies to the Shag Point Branch, Conns Creek and Rewanui branches primarily because of their scenic locations and the number of other interesting things to do in the area.

Vintage or steam railways operating on portions of branch lines which are described have been referenced within and/or at the end of the relevant description e.g. Weka Pass Railway in the Waiau Branch description, Pleasant Point Railway and Museum in the Fairlie Branch description.

All decisions about which branch lines have been included, and those which have been excluded, were made by the authors, who have attempted to apply the selection criteria objectively and accurately.